For walkers there is a fairly obvious route from Chesterfield to Chatsworth and the wider Peak District from the end of the Trans Pennine Trail spur at Chesterfield Rail Station – via Queens Park, Walton Dam, Somersall Park, Holymoorside, Eastmoor, Beeley Moor, and Hob Hurst’s House (11 miles).
Cyclists can follow it to Somersall Park and then need to divert to quiet roads and tracks via Holymoorside and Beeley.

There is a statue of George Stephenson outside the rail station.
The ‘father of the railways’ spent the last ten years of his life in Chesterfield and is buried at Holy Trinity Church. 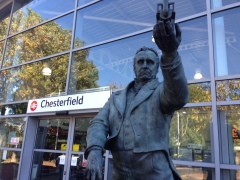 Turning left out of Chesterfield station past the main car park there is a cycle / walking route that crosses the town, ending at its western edge in Somersall Park.
Queens Park in Chesterfield was established in the late 19th century to mark Queen Victoria’s Golden Jubilee and has witnessed some of the world’s greatest cricketers in action against Derbyshire.


Crossing Boythorpe Road to Dock Walk brings up Cannon Mill on the right (one of Chesterfield’s oldest industrial buildings), and a supplier of weaponry for the Napoleonic Wars.


Just after Cannon Mill there are several murals on the left depicting activities at the long-established Robinsons Company.
One records the famous
centenary outing in 1939 when 4000 employees were treated to a celebratory train visit to London.

Cross Walton Road and follow the track through Walton Dam to Somersall Park.
A path from Somersall Lane then leads on to the village of Holymoorside, offering the last chance of refreshment on the route.
Follow the quiet Harewood Road from Holymoorside, and turn right onto a footpath near Cathole Farm.
Climb the hill, turn left onto Longside Road, right onto Syda Lane – and then follow the access land to the left over the wilds of Eastmoor, Beeley Moor, and into the Chatsworth Estate.